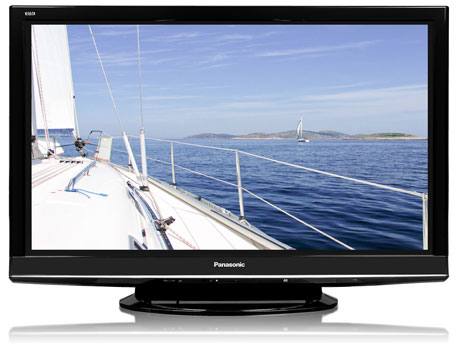 This 50-inch (1.27-meter) TV belongs to Panasonic’s equivalent of the Volkswagen “Golf class” – that is, the lower mid range. If you know about cars, you’ll know what this means: This class provides the best price-for-performance ratio. For TVs of this size, the Japanese manufacturer uses plasma technology, and the TX-P 50 G 10 (also see Panasonic’s G10 Series) uses the twelfth generation of this type of flat-panel – this generation claims to consume significantly less power than its predecessors.

Panasonic refers to the screen type as “Tough Panel”, since it unflinchingly withstands the impact of a ball bearing, for example. In the G series, the manufacturer concentrates on the basic feature list – you won’t find extras such as network capabilities here. In the later part of this article, we take a look at what the competition has to offer in the same size and price class.

The TV’s 50-inch (1.27-meter) screen displays HDTV pictures in maximum sharpness, with a resolution of 1,920 x 1,080 pixels (“full HD”) – with a screen of this screen size, you’ll be able to detect the additional sharpness even from the living room couch. You can find details on the ideal viewing distance in our “TV Buying Guide”.

Panasonic seems to want to join in Sony’s “how many Hertz” number game: Panasonic is currently advertizing “600 Hz Intelligent Frame Creation Pro”. If you look closely at the corresponding logo, you’ll notice the affix “sfd” – this stands for “Sub Field Drive”. Because of the way plasma screens display images, the individual pixels run at a rate of 600 Hertz. In practice, however, the TX-P 50 G 10 is a 100-Hertz TV. The “Intelligent Frame Creation” promises fluid motion.

Potential buyers should resist these attempts to impress with figures and technical terms – the more important thing to consider is the actual picture. Smaller brother the TX-P 42 GW 10 already impressed Televisions.com with its picture quality. The “Cinema” picture preset gives an almost ideal setup. Experts go on to set the “Gamma” to 2.2 and switch off the picture cropping (overscan) in the menu. With these settings, the 42-inch plasma’s impressive, extremely detailed picture outstrips most of its LCD rivals.

With special test patterns, we did notice a bit of flicker on this relative of the TX-P 50 G 10, but this doesn’t irritate during everyday TV viewing. DVD movies still show a little flicker along fine, diagonal lines – unless the DVD player itself is able to eliminate this so-called line flicker.

Colors only deviate slightly from the ideal, and the picture’s contrast is perfect. Furthermore, the picture impression remains the same from every viewing angle – typical for plasma technology. Televisions.com can highly recommend the TX-P 42 GW 10 – and therefore its almost identical British cousin, the TX-P 42 G 10 – as a home-theater display.

In this model, Panasonic concentrates more on the basic virtues of a TV. The TX-P 50 G 10 has a slot for SD and SDHC memory cards, allowing it to play back digital JPEG and AVCHD video clips, but this plasma offers no other multimedia extras.

The TV receives analog cable TV and – where still in use – analog terrestrial TV, as well as DVB-T, DVB-C, and DVB-S. It also supports HD for all digital standards. In principle, therefore, the TV is equipped for all current reception methods – all that remains is the pesky question of digital-cable access systems. Some cable networks have decided to use CI Plus to control access – but this is not supported on the TX-P 50 G 10.

Channels using CI encryption, as opposed to CI Plus, will still display without problems, but future Pay-TV channels may require an additional set-top box. For this reason, Panasonic doesn’t advertize the TV’s digital cable tuner in all countries. Satellite TV viewers have everything they need on this TV – except in the case of some pay-TV channels.

The UK version of the TV is adapted to the UK’s cable services and supports the freesat services that began in 2008. The TV’s analog inputs accept video signals in the PAL, Secam, and NTSC formats.

The TV has a practical set of connections: Two Scart sockets (both RGB capable, one S-Video capable) should be enough to accommodate older devices. The rear panel’s two HDMI inputs aren’t luxurious, but should be enough for typical usage – there’s a third HDMI input on the front of the TV, under a small flap.

The flap also conceals a camcorder connections panel with a Mini-DIN socket for S-Video signals and a cinch input for composite video signals. Here you’ll also find the SD-card slot and a 3.5-millimeter-jack headphone output.

The remote control and on-screen menu are identical for all TV sizes in the G 10 series, so our observations of the 42-inch version should also apply to the TX-P 50 G 10. Although a little on the heavy side, the remote sits comfortably in the user’s hand. The buttons are, for the most part, clearly laid out, and the most-used buttons – for volume and channel changing – are sufficiently large.

One irritating aspect: The “N” button, used to return all picture settings to their factory values, is immediately next to the menu button – it’s easy to press the wrong button by mistake.

The simply laid out on-screen menu is easy to read, and even inexperienced users will be able to keep track of where they are. The channel search sorts the channels into the usual order for the user’s country.

Panasonic echoes Henry Ford’s famous quote: “Any customer can have a car painted any color that he wants so long as it is black.”

Panasonic gives instructions for wall-mounting the TV using an optional bracket, the TY-WK 4 P 1 RW, but does not list the product on its UK website. Display-mounting manufacturer dekomount offers a universal bracket (DM101, 37 GBP) which it claims will fit the TX-P 50 G10. 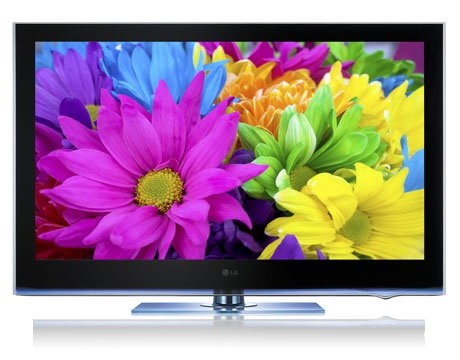 This plasma TV’s tuner is significantly less powerful than the Panasonic’s: The LG only accepts DVB-T and analog cable. The display panel has full HD resolution and is THX certified. Thanks to 100-Hertz technology, the screen is supposed to be flicker-free.

The practical connectivity includes four HDMI inputs and two Scart sockets. For headphones, however, there’s only a wireless (Bluetooth) connection, which requires a corresponding Bluetooth headset. In terms of multimedia, this model is ahead of the TX-P 50 G 10: Via USB, the LG PS 8000 plays back videos, photos, and music. 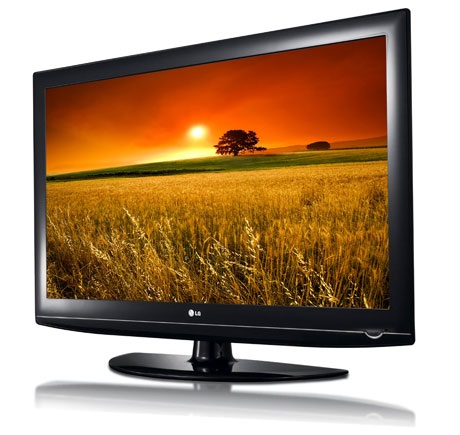 With a screen diagonal of 52 inches, this LCD from the LG 5000 series has two inches more than the Panasonic. The LG 5000 comes from the 2008 model-year and therefore, as you’d expect, the tuner is scanty by this year’s standards, accepting only analog cable TV and DVB-T.

The Korean manufacturer deprives this model of any multimedia capabilities. Apart from the missing headphone output, the TV offers plenty of all the important analog and digital connections. 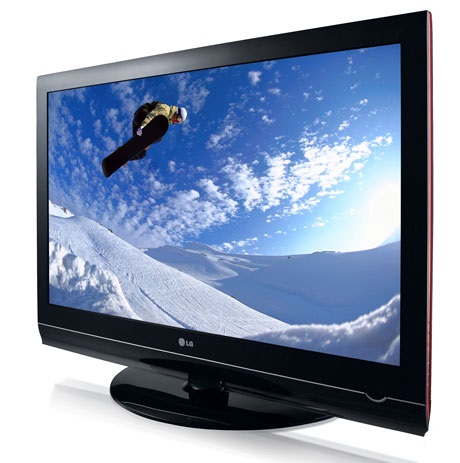 The LG 7000 from LG Electronics also stems from the 2008 model-year – no successor-model was available at the time of writing. Thanks to 100-Hertz technology, this TV aims to make motion appear more fluid. With four HDMI inputs, this model offers one more than the LH 5000 (above), but the tuner once again only accepts DVB-T and analog TV signals.

The LG 7000 plays back videos, photos, and music from a USB stick. The TV offers all the important connections – and in sufficient quantities – but it’ll only connect to headphones via Bluetooth. 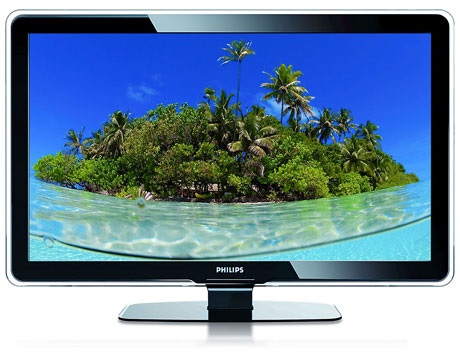 The 52 PFL 7203 H was released in 2008. Like the Panasonic TX-P 50 G 10, it has an HDTV-capable cable tuner. But, for the same reasons as Panasonic (lack of CI Plus support), the manufacturer doesn’t advertize this feature in some countries. Those wanting to use the TV to receive free-to-view digital cable channels should set the TV’s location to Finland. The on-screen menu will of course continue to speak the language of your choice. The TV also receives DVB-T (also in HD) and analog cable signals.

The eye-catching, sturdy frame is more than just a design feature – it houses a cunning sound system that claims to sound much better than the thin whining of most flat-panel TVs. Televisions.com has already tested a number of models related to the 52 PFL 7203 H, and can indeed testify to their above-average, if a little diffuse, sound.

Philips has tried to pep up the picture impression with its Pixel Plus 3 HD technology, so the image should appear crisper. It’s not technically possible to conjure up fine details that aren’t present in the original picture, but a TV can convey a greater subjective impression of detail. Furthermore, the “HD Natural Motion” system aims to make moving pictures look fluid and sharp.

In absolute terms, this Philips has pretty weak multimedia capabilities, but these still beat the Panasonic’s: The TV will play back JPEG photos and MP3 music files from USB sticks. Connectivity is practical; the three HDMI inputs and two Scart sockets will cater for most device collections. 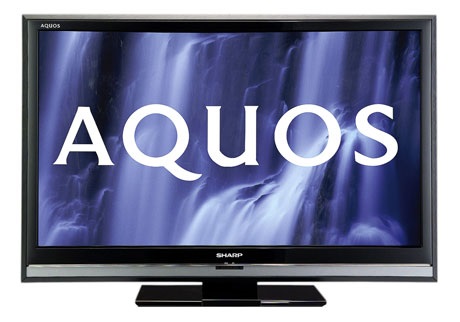 Like many of the Panasonic’s LCD rivals, this Sharp offers a two-inch bigger screen diagonal. It makes do without 100-Hz technology, along with various other costly extras. The LC-52 D 65 E’s tuner is clearly inferior to that of the TX-P 50 G 10. In the Sharp, the tuner only accepts analog cable and DVB-T. This model also plays back photos via USB, but that’s all. 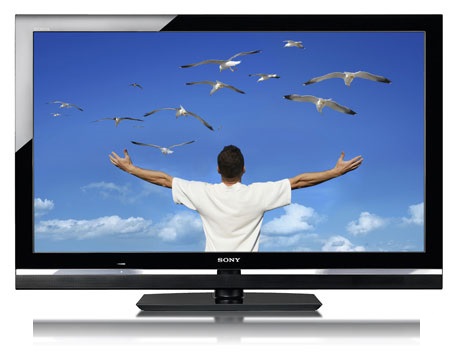 This LCD TV from Sony has been available since March 2009. It also has two inches more screen diagonal than the Panasonic. Televisions.com has already tested the Sony KDL-52 V 5500, and made the following observations: Despite the 50-Hz technology, motion doesn’t look noticeably blurry – so you’ll have no trouble watching football on this TV. Dark scenes are not as black on the KDL-52 V 5500 as on a plasma TV, but night scenes are impressive for a conventional LCD device. Those using the TV in bright conditions will have little cause to grumble.

The tuners in this Sony and its Panasonic rival both have strengths and weaknesses. Both accept analog cable TV and DVB-T, the latter also in HD where broadcasts exist. Thanks to CI Plus technology, the Sony’s tuner is ready for future digital-cable broadcasts – the Panasonic’s is not. On the other hand, the Panasonic’s satellite-TV receiver puts it a step ahead of the Sony – satellite viewers opting for the KDL-52 V 5500 would still need an external receiver.

The Sony claws its way back up the rankings, however, with multimedia and network capabilities: If you connect the TV up to a router with an Internet connection, you can integrate various Internet news tickers (“RSS feeds”), which then display in small windows on the TV’s screen. When activated, the so-called “AppliCast” function displays the RSS feeds in small windows on the TV screen. This doesn’t just have to be text; if the feeds contain photos, the TV displays these too. The Sony also plays back photos, music, and videos from USB sticks as well as over a PC network. The Sony lends itself especially to IT-savvy users that plan to use their TV in a bright environment. The Panasonic, on the other hand, is the better choice for home-theater fans. 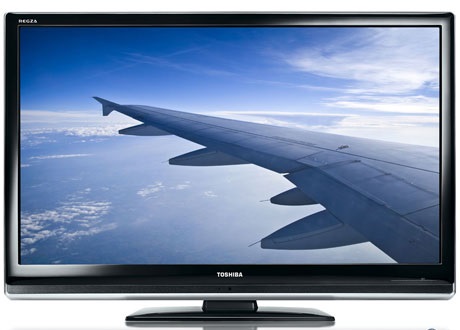 Toshiba is discontinuing the 52-inch class, but this model is still widely available at the time of writing – and presumably for significantly less than the manufacturer’s recommended price. Televisions.com has already tested the 52 XV 555 D: Put simply, the Panasonic is better. It offers a much darker black, more accurate colors, and a more flexible tuner.

About our product previews

We comprehensively research the information we use, but data of this kind quickly becomes out of date as a result of day-to-day variations in the market and the appearance of new products.

The information in our own tests is more reliable, especially statements relating to quality or comparisons with other TVs. Since we cannot test every single device, however, and because we’re interested in your opinion, we’re grateful to receive any user ratings or user opinions for this TV – especially if you own the model yourself, but also if this preview provided enough information for you to form your own judgment.