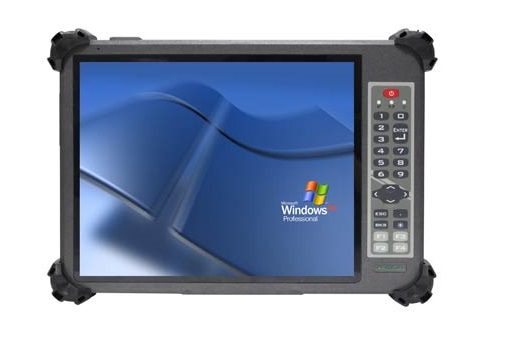 However, Arbor still isn’t aiming for consumers here. Rather, the rugged device is intended for warehousing applications, and again caters to the butter-fingered user, with the claimed ability to withstand 40G shocks (11ms duration) and survive four-foot drops onto a wood floor. The G1050 also meets the IP54 standard for resistance to liquids and dust, the company adds.

In fact, the G1050 seems like a compelling (if heavier at 2.4 pounds) alternative to the Windows CE-powered handhelds that currently dominate the warehousing field. According to Arbor, dual hot-swappable batteries (one 1880mAh, one 2500mAh) allow it to work for nine hours, which is comparable to smaller alternatives.

And of course, the G1050 runs a full Windows 7 installation on its Intel Atom Z530P processor (paired with the SCH US15WP companion chip and 2GB of DDR2 memory). There’s 32GB of SSD storage, plus an SD/SDHC slot for adding flash memory, Arbor says.

According to Arbor, the G1050’s resistive touchscreen is complemented by ten number keys, a four-way controller, and four function keys. Presumably the latter can be configured to trigger scans and picture-taking, since the tablet is also said to have a autofocus two megapixel camera and a 1D/2D barcode scanner (plus a 13.56MHz RFID reader).

Other onboard features include an ExpressCard/34 or ExpressCard/54 slot, a USB 2.0 port, and a 35-pin connector for an optional desktop cradle, Arbor says. In addition to the expected 802.11b/g/n wireless networking capability, there’s Bluetooth 2.1 plus an optional Qualcomm Gobi 3000-based cellular modem that’s operable worldwide, the company adds.

Specifications listed by Arbor for the Gladius G1050 include: