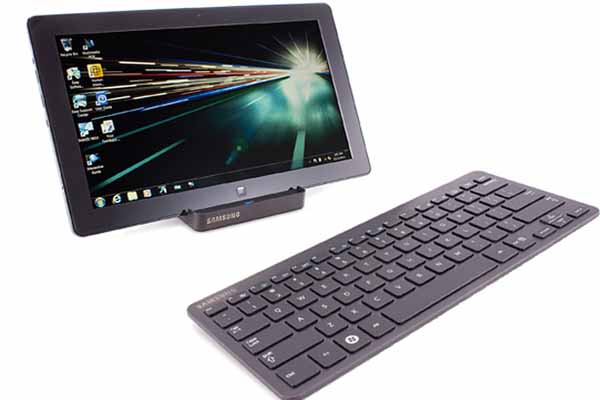 Samsung announced a Windows 7 tablet that should delight those who think current offerings are underpowered. The “Series 7 tablet” reportedly includes an 11.6-inch screen, choice of Intel Core i3 or i5 processors, 4GB of RAM, a 64GB or 128GB SSD (solid state disk), plus an optional Bluetooth keyboard and docking stand.

As far as we can see, Samsung hasn’t issued a press release detailing its new Series 7 tablet, but the device has been widely detailed by journalists attending the IFA Berlin trade show — where the vendor also announced new laptops, phones, and other devices. Here, we distill information provided on the tablet by CNET, Engadget, Laptop Magazine, and PCWorld.

All sources agree on the device’s specs — which suggest that Samsung has come up with a product that will please those who think existing x86 tablets are underpowered. (Count us among them: Atom-powered tablets crawl compared to Apple’s iPad 2 or other competition using ARM processors.)

The Series 7 tablet will make its debut with a Core i5-2467M CPU, a processor that has a 1.6GHz clock speed, dual cores, and a 17-Watt TDP. Apparently a lesser version will also be sold with a Core i3, though no further details were provided on this.

Samsung teams this CPU with 4GB of DDR3 RAM, plus 64GB or 128GB of SSD storage. Meanwhile, the Series 7 tablet is said to have an 11.6-inch capacitive touchscreen, with a 400-nit brightness rating and a resolution of 1366 x 768 pixels.

Also noted is the fact that the Series 7 tablet also includes a stylus, apparently paired with an active digitizer from Wacom. As the video embedded later in this story shows, the stylus makes it easier to write on the device’s screen and to invoke handwriting recognition.

For touch typists, however, Samsung is also offering a smartly styled Bluetooth keyboard. Also available is a docking stand (above) that holds the tablet up at an angle and also provides Ethernet, HDMI, and USB ports.

The Series 7 tablet itself is said to include a full-size USB port, a microHDMI port, and a microSD slot. Of course, 802.11b/g/n wireless networking is also on board, plus a SIM slot that will support an optional cellular modem.

Reports says the Series 7 tablet will be 0.5 inches thick, with a weight of just over two pounds. Further cited are dual cameras: a front-facing two megapixel webcam, and a rear-facing three megapixel shooter.

Set to ship with Windows 7, the Series 7 tablet should readily be upgradeable to Windows 8 in due course. But the device also comes with custom software created by Samsung: Visible in the Laptop image earlier in this story, this provides a swipeable list of applications that’s reminiscent both of Android and iOS.