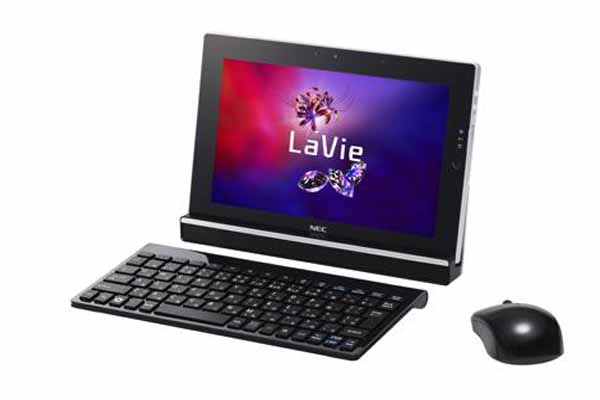 NEC announced a Windows 7 tablet that has ten-hour battery life and is bundled with a DVD dock as well as a wireless keyboard and mouse. The LaVie Touch includes a 10.1-inch touchscreen with 1280 x 800 pixel resolution, a 1.5GHz Atom Z670 processor, 2GB of RAM, a 64GB solid state disk (SSD), a webcam, HDMI output, and an SD expansion slot.

Powered by Intel’s dual-core Atom Z670 (“Oak Trail”) processor, NEC’s tablet was first announced back in May as the VersaPro Type VT, though the company conceded at the time that the device wouldn’t go on sale until September. Now, it has been renamed the LaVie Touch and has been bundled with a DVD dock and wireless peripherals, as seen below.

We’ll start with the latter, since they’re not typically featured with a tablet. The LaVie Touch’s dock incorporates a docking connector and stand: On its left side (below left) there are two USB 2.0 ports, while its right side (below right) includes a read/write DVD/CD drive, according to NEC.

As seen in the left-hand picture above, the LaVie Touch includes two additional ports on its main body, plus an HDMI port, an SD slot, and audio I/O. Meanwhile, the device is also bundled with a wireless keyboard and mouse (pictured below), which apparently utilize its Bluetooth 2.1 radio.

Other ingredients are more typical, though still welcome. For example, there’s a 10.1-inch capacitive touchscreen with 1280 x 800 resolution, a 64GB SSD, and 2GB of RAM (apparently non-expandable), according to NEC.

Also cited by NEC are a webcam (resolution unspecified), stereo microphone, and a monochrome speaker. Without saying how big the LaVie Touch’s battery is, the company rather ambitiously claims 10.6 hours of operation on a 4.5-hour charge.

Specifications listed by NEC for the LaVie Touch include: