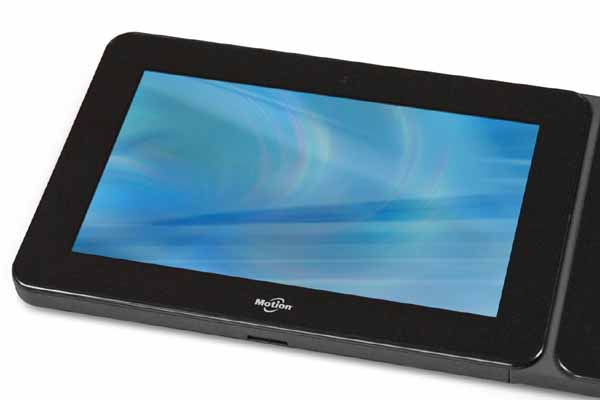 Motion Computing’s Oct. 18 announcement referred to the new SlateMate magnetic stripe reader (MSR) and barcode scanner as “integrated expansion options” for the company’s previously released CL900 tablet, which was announced in January and shipped in May. It also noted that these facilities are “securely integrated into the internal frame” and cannot be ordered separately, however, so what we have here is essentially a new model.

The nicely integrated MSR and 1D/2D barcode scanner don’t add to the CL900’s 0.61-inch thickness, but tack on some width — 2.16 inches, to be specific. Weight for the SlateMate configuration is up from 2.1 pounds to 3 pounds, Motion Computing adds.

According to the company, the MSR uses MagTek technology, already certified with most payment processors. Meanwhile, the barcode scanner reads Code 39, Code 128, UPC-A, UPC-E, Interleaved 2 of 5, MicroPDF417, PDF417, and QR Code symbologies out of the box, and it’s said more may be added.

It stands to reason that the SlateMate additions would have some effect on the CL900’s battery life, at least when they’re in use, but none was quantified. Motion COmputing has previously reported that the Atom Z670-powered CL900 delivers up to eight hours of battery life. (The company adds that the device can recharge in just two hours, for a 4:1 “work-to-charge” ratio.)

Resembling a wider version of the Apple iPad, Motion Computing’s CL900 is not as rugged as some of the company’s previous tablets, but has a Corning Gorilla Glass screen and is said to meet the MIL-STD-810G standard for resistance to four-foot drops. It also has an IP52 rating for resistance to dust and liquids, the company adds.

The CL900 offers 1GB or 2GB of DDR2 RAM, plus SSD storage in 30GB or 62GB capacities, Motion Computing says. Its 10.1-inch screen is said to offer 1366 x 768 pixel resolution, capacitive touch, plus N-trig DuoSense technology that responds to an optional active pen.

According to Motion Computing, the CL900 also features optional cameras: a 1.3 megapixel front-facing unit and a rear-facing device with up to three megapixels. Networking capabilities, meanwhile, include 802.11a/b/g/n, Bluetooth 3.0, and an optional Qualcomm Gobi 3000 cellular modem that supports both GSM and WCDMA, the company adds.

It’s said I/O consists of one USB port, a micro-HDMI video output, and a connector for an optional dock, the latter adding three USB ports and an Ethernet jack. The CL900 also offers an SD slot and a SIM slot, says Motion Computing.

Features and specifications listed by Motion Computing for the CL900 SlateMate include:

According to Motion Computing, the CL900 SlateMate is available for order now, though pricing was not specified.