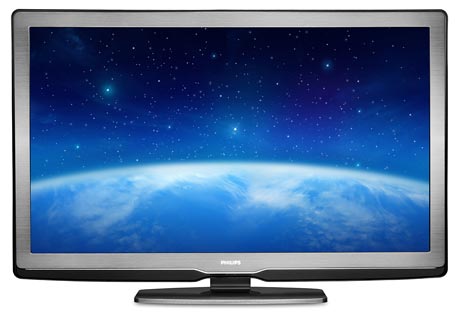 Wow, what a deep black! Philips’ new 52-incher will captivate home-cinema fans with near-perfect blacks and an extremely cinematic picture. But this Dutch LCD struggles with colour fidelity and suffers from side effects related to its Local Dimming technology. Still, the 52 PFL 9704 presents a very interesting package — and also sounds surprisingly good.

The Philips has a lot of multimedia to offer: An internet connection, which Philips dubs “Net TV”, allows the PFL 9704 to tune in to web radio or to display YouTube videos. Multimedia files play back via USB or the network connection, as well as wirelessly (WLAN).

Typically for Philips, the first feature you notice is the Ambilight technology, which illuminates the wall around the TV in the colours of the current picture. This not only looks spectacular, but also takes the strain off the viewers’ eyes. The screen’s backlight is split into 224 separately controlled zones (“Local Dimming”), which helps to reduce the power consumption to just 95 watts — that’s impressively low for such a huge, bright picture! The tuner accepts analogue TV, DVB-T, and DVB-C, including HDTV signals, and also supports “CI+”, the forthcoming digital pay-TV standard. 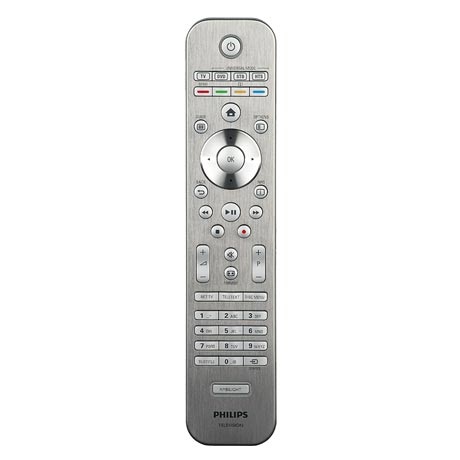 The remote control looks elegant and sits snugly in the user’s hand.

We won’t waste too much time praising the remote control: It looks great, sits well in the hand, and does everything you need it to do. The menu, however, is less user-friendly. Just to access the sharpness setting, for example, the user has to press twelve buttons! The menus also sometimes react with a significant time delay, which is really irritating in everyday use. The connections on the unit’s rear are hard to reach because of their central position. 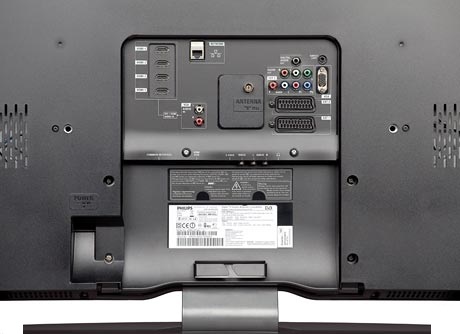 You get the best picture in the “Cinema” preset. Apart from some moderate, artificial contrast-enhancement, this preset deactivates all image-enhancements. The analogue TV picture then displays slight noise, but — apart from slightly too-rosy skin tones — it looks fairly natural. The digital TV picture looks more detail-rich and also suffers from less noise. Transmissions via Scart look slightly blurry, but show barely any line-flicker in camera pans.

If you use a set-top box that lacks format switching, you’ll run into problems: Broadcasts in 4:3 format, up-scaled to HD, only display in the correct format in “PC Mode”. The problem is that PC Mode prevents you from using the new motion-sharpness technology, “HD Natural Motion” — this stops fast-moving TV pictures from blurring. It also works with films, but motion then looks too fluid. We therefore recommend watching films with “HD Natural Motion” deactivated, since there’s barely any blur to combat in the first place. Tip: For optimum motion clarity in films, set the contrast setting to 75. 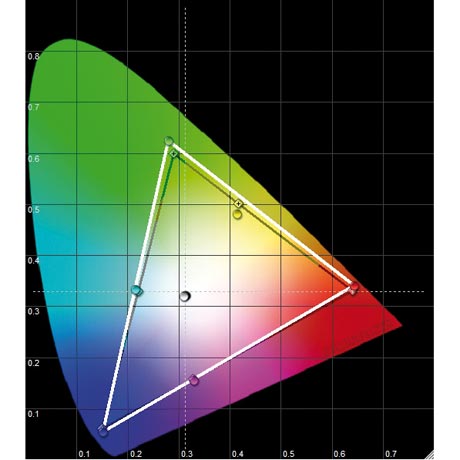 The Philips shows neutral greyscales, but adds a pink tint to skin tones.

So what about the top discipline, Blu-ray? Here, the 52-incher makes quite an impression — the Will Smith blockbuster “I, Robot,”, for example, displays in astonishing sharpness. The impressive brightness of small spots of light and the almost perfect black earn rapturous applause. Even in the film’s dark opening sequences, the picture shows depth and plasticity: Dark details are cleanly differentiated instead of simply merging into the background. Contrast on this Philips even surpasses our current reference standard, set by Pioneer’s KRP-500 plasma, but the overall picture quality falls short in a few other areas — in fact, the massive contrast also brings side effects: In the intro to “Casino Royale”, areas of colour flicker and halo effects appear as soon as bright objects meet a dark background. When viewed from the side, the effects are even stronger.

Local Dimming also results in a blue-turquoise colouration in bright details on a dark background — you can see this effect in Will Smith’s teeth and eyes (at 18:19), for example. Skin tones also look slightly unrealistic (too pink!) and grey rocks tend to look too violet. In black-and-white films such as “Casablanca”, we saw strip-like, violet colouration on the left and right sides of the screen — well, wherever it is, it definitely doesn’t belong there!