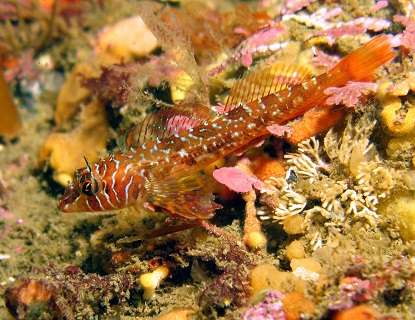 On average, the water temperature in the world’s oceans rose 0.18°F (0.1°C) over the last century, less than the 1° Fahrenheit registered on land but still enough to have a significant effect on aquatic ecosystems.

Many marine species are highly sensitive to water temperature, which affects their overall survival. Many types of fish, for example, have migrated deeper into the ocean so that they can maintain their core temperatures.

This climb in temperature has taken place throughout the aquatic ecosystem and has threatened habitats as a result. River temperatures have risen enough that the prevalence of salmon and trout, which require cold water, is projected to drop dramatically over the next century in U.S. rivers. Populations may plummet as much as 17 percent by 2030, 34 percent by 2060 and up to 42 percent by 2090.

Warmer air and water cause polar ice and glaciers to melt, which causes a rise in the sea level. The U.S. Environmental Protection Agency (EPA) estimates that the oceans may rise as much as one meter by the end of the century. The increase in levels may flood some coastal areas, which will disrupt coastal habitats for marine life. The breeding and pup-raising grounds of some seal species, for example, have already suffered encroachment.

In addition, rising sea levels decrease the amount of light filtering through to deeper areas. Light is essential for photosynthesis, which ocean algae and plants depend on. Since plants and algae are important parts of the ocean’s food chain — larger species feed on them — a decrease in their availability could threaten the survival of larger species.

Climate change is driven by increased emissions of carbon dioxide into the atmosphere and the oceans. Absorbing carbon dioxide boosts oceans’ acidity levels. Current and growing pH levels impede the creation of shells for marine animals like lobsters, crabs, sea stars and zooplankton. Without the ability to form shells, their survival is threatened.

The EPA estimates that climate change will disrupt weather, causing more extreme events. They also expect acute polarization: periods of extreme rainfall alternating with dry spells. One result of excessive rainfall can be increased nutrients in the water. This, in turn, can cause abnormal growth of algae, often referred to as harmful algae blooms (HAB). Large blooms can impede sunlight getting to some parts of the ocean, and they suck up oxygen other aquatic life forms need. The diminished sunlight also impacts photosynthesis.

Prolonged warm and dry spells also cause polar ice to melt, disrupting and threatening the habitat of penguins, which have already begun migrating to new areas of Antarctica.

Coral reefs in some areas are showing major stress already, and this trend is projected to continue. The threat to coral reefs is complicated and stems from both high water temperatures and changes in ocean chemistry. Symbiotic algae cause coral’s color. The symbiosis is threatened if the water is too warm. The result? Coral bleaching, which is harmful and even life-threatening. Two coral species, elkhorn and staghorn, are currently covered by the Endangered Species Act.

What can you do to help stop climate change? Carbon dioxide emissions, a primary contributor, are caused primarily by fossil fuels and other energy sources. Drive less and ensure that your car complies with emissions standards. Use energy-efficient lights in your home. Be green and mindful of energy consumption, turning off lights and recycling.