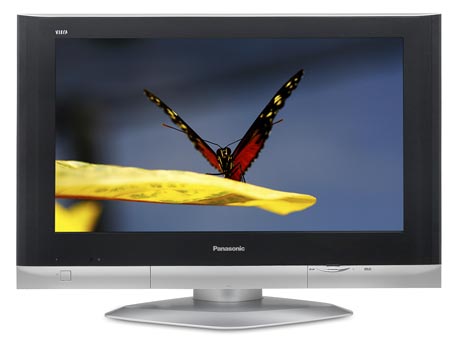 The Panasonic impresses with its luscious picture and neat operation. However, one has to abandon any thoughts about having accurate details from HD material displayed on this plasma set.

Panasonic has a very clear marketing strategy: Televisions with screen sizes greater than 37″ (97 cm) are all manufactured using plasma components. The manufacturer has invested a good deal of time and money perfecting this kind of technology.

As expected of a plasma TV, the 42″ panel of the Panasonic TH-42 PX 60 E delivers rich contrast and genuine blacks. The video electronics process analog material to an exceptionally high standard, but HDTV material, although presented well, lacks the screen resolution (only 1024 x 768 pixels) to do justice to content played back through HD set-top boxes, HD DVDs or Blu-ray equipment.

Relatively standardized feature set:
The tuner accepts analog cable television transmissions along with terrestrial digital video broadcasts (DVB-T). Three Scart sockets, one YUV interface together with a front-mounted AV input for camcorders should be enough. However, for today’s high-tech consumer industry, the two HDMI interfaces could prove to be too few. The Panasonic is equipped with a standard analog VGA interface for use as a computer monitor – its use is therefore limited to older generation PCs.

“Link”-enabled video recorders synchronize their channel presets with the television via Scart sockets 2 and 3, and can be programmed for recording, provided that the recorders themselves are capable of receiving analog cable TV.

HDMI connected playback equipment can have their main features controlled through the HDMI Consumer Electronics Control (CEC), which is accessible through the television’s menu.

A suitable pedestal is available for a surcharge, but then there is a choice between fixed and rotatable.

First Time Operation:
When powering-up the Panasonic for the very first time, the operator is requested to select the language in which the menu is to appear, and the country in which the set will be operated. Thereafter, the television begins to scan the airwaves for suitable broadcasting stations and places the ones (DVB-T) it finds in a meaningful order.

Screen Menus:
The screen menus are unsophisticated and resemble the Teletext output found in consumer devices of the 1980s. This, however, does not detract from its primary function as the menus themselves are clearly divided into separate functionality blocks, and navigation via the remote controller is both intuitive and brisk.

Remote Control and Channel Changing:
The remote itself leaves a good impression: It sits well in the hand, and all the main buttons are within easy reach and do not need to be searched for. When changing TV channels, the Panasonic scores just average in speed: Approximately 1.5 seconds are required for the new analog station to appear whereas some 2 seconds are the order of the day when selecting from DVB-T stations. 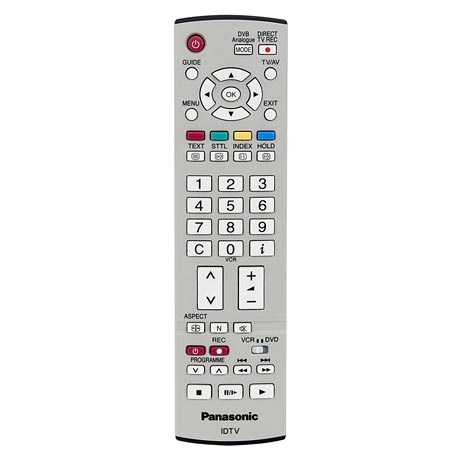 “Guide” and “N” Buttons:
Pressing the “Guide” button will display a list of available channel presets. This information is presented in a very basic manner – in analog mode, just the broadcasting station name is provided, whereas in digital DVB-T mode, this information is enhanced with the current program and name of the next program. This “feature” has nothing in common with a real program guide!

One button on the remote controller must be treated with the greatest of respect: The reset button “N” returns all presets back to their factory set values and is nestled between the mute button and the screen format button.

TV Picture Quality:
The Panasonic TH-42 PX 60 E delivers a very convincing picture when the preset “Cinema” is activated and the color temperature is set to “Warm”. Both cable television and DVB-T content are rendered with authentic colors, have a good depth of contrast and do not show signs of manipulation. Bright pictures however, do show signs of large area flicker, but this is nowhere near as disturbing as the same scene rendered on a more traditional 50 Hz tube television.

The Panasonic does iron out detailed features where motion is present, such as the skin of actors moving within a scene. In general, the Panasonic does reproduce motion well as proved when displaying marquee texts (stock market tickers, news announcements and the like).

DVD Picture Quality:
Pictures from TV sources are rendered a little too brightly, but when playing back movie material from a DVD, the Panasonic TH-42 PX 60 E shows its true contrast potential. The near perfect black the Panasonic is capable of achieving makes the universe in the “Space Cowboys” film seem incredibly deep and almost three dimensional. The tracing of darker tones is accomplished without the addition of unwanted noise and is pleasantly crisp.

Digital artifacts, such as gradation patterns and colored shadowing, are only very slightly noticeable, and do not have a lasting debasing effect on the overall superb picture quality. This quality is not limited to the playback of digital HDMI content – analog material played through the analog video inputs, such as RGB Scart, delivers equally pleasing results.

Feint artifacts in the form of jaggedness and line flicker do occur when the camera pans across a scene – these are observed in the movie “Six Days, Seven Nights” where there are several pans across the beach. Colors are harmonious and consistent, and the preset “Warm”, with its color temperature of 6,800 Kelvin, is just marginally off the ideal at 6,500 Kelvin producing imagery that is just a touch too cool.

The lack of HD screen resolution (1280 x 720 pixels or 1920 x 1080 pixels) causes the Panasonic to down-scale the content to suit its 1024 x 768 pixel screen. It is here that the Panasonic has blundered more compared with other manufacturer’s products with the same screen size.

Test pictures show slight digital jagged artifacts resulting from the down scaling. In reality though, this effect is kept to a minimum as witnessed when playing the Blu-ray disk “Aeon Flux”, or Willy Bogners “Ski to the Max” on WMV HD Disk. However, it must be said that anyone wishing to view all the fine details HDTV is capable of displaying, will not be best served with the Panasonic even though the HD signals are interpreted very pleasantly on the screen.

Judder free playback of 24 Hz original cinema material is impossible with the Panasonic TH-42 PX 60 E television: HD DVD or Blu-ray material in the 24p format is simply not recognized by this set.

Computer Operation:
The TH-42 PX 60 E does not fare well when used as a computer monitor: It only accepts PC signals in 4:3 resolution and therefore distorts the picture across the whole width of the screen. Film material shot in 16:9 technology is not so bothersome. The bottom line is that the Panasonic is completely unsuitable for use as a large screen computer monitor for photographs or film material shot in 4:3 format.

Sound Quality:
Even with the volume turned up quite high, the loudspeakers deliver clear and recognizable speech, but music, by comparison, sounds dirty and muffled. Keynotes have depth and are crisp, bass tones, however, are not. A feint humming emanates from the loudspeakers but this is only really apparent when near the rear of the set.

Settings for the best home-theatre performance*

* applied to realistic playback from HD DVD/Blu-ray material through the HDMI interface in a darkened environment. Manufacturing and HDMI playback device deviations could necessitate slight adjustment. 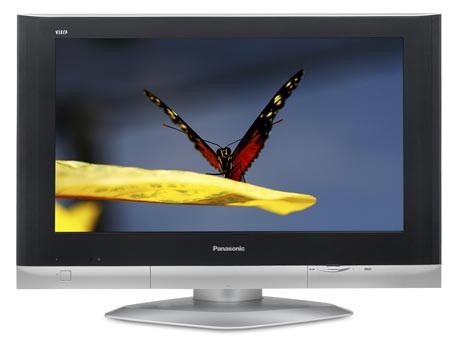 Modest: The Panasonic will not win any design awards with its inconspicuous exterior. 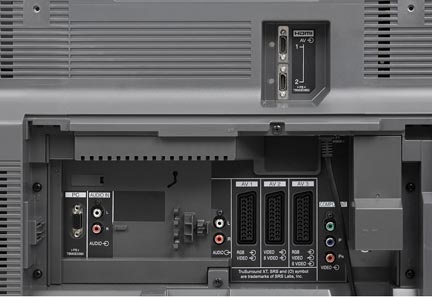 Adequately equipped: Three Scart sockets are more than enough for everyday use, but two HDMI interfaces could prove insufficient. 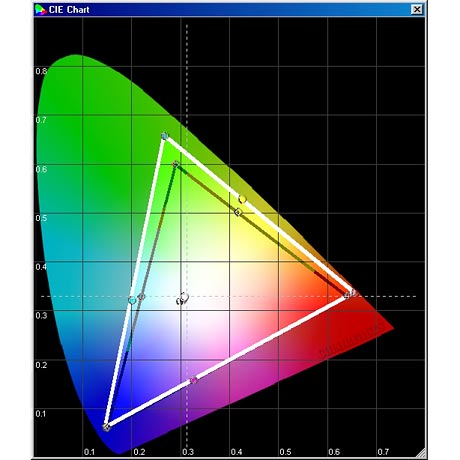 Off the mark: The colors are slightly shifted from the ideal, but they come across quite naturally anyway. 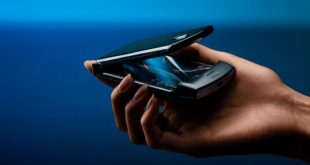 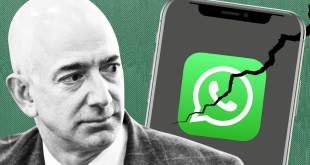 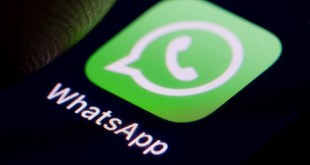