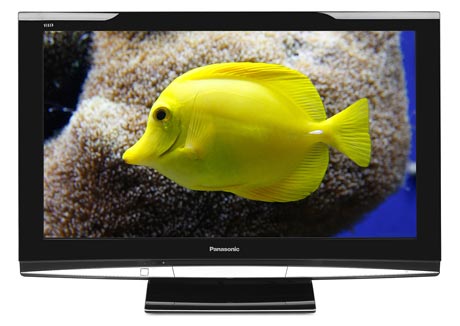 This Panasonic is the insider’s tip for price-conscious home-theater fans. At budget price, it offers top-class contrast and pure black, excellent HD quality and decent sound. The picture looks natural, and this Panasonic has done away with the typical weaknesses of plasma technology. Only very fast moving, contrast-rich edges show slight green ghosting. Operation is simple, and the AV features are practical.

For large screen diagonals (from 37″/94 cm), Panasonic consistently chooses plasma technology. Together with its technology partner, Pioneer, it has built up a reputation for offering cutting edge technology in this sector. At about 1,800 GBP incl. VAT, the test candidate represents great value, and really defies the aggressive competition from LCD.

The TH-46 PZ 80 E will strengthen Panasonic’s reputation – the picture comes much closer than LCD technology to the quality of an excellent CRT set. The total lack of viewing angle dependence is one intrinsic plus-point of plasma technology. Home-theater fans will have only one complaint – standard PAL, and NTSC in particular, are not processed quite as well as they could be.

Casing:
The front side of the TH-46 PZ 80 E is simple, but thoroughly elegant. The bottom is dominated by a curved silver strip, and the rest by a broad, high-gloss black frame. The screen visibly reflects ambient light, but not excessively – the latest glossy laptop monitors are worse in this respect. The loudspeakers are hidden behind a fine grille just above the silver strip.

In the middle there is a flap covering the front AV inputs, headphone socket and SD card reader. This connections panel is significantly more accessible than on many other flat-panel TVs, where these connections are placed on the side for design reasons.

The supplied pedestal is solid, and allows rotation by around 10 degrees in each direction. The TV itself does not have a swivel connection; instead there is a turntable mounted almost invisibly below the pedestal.

The back of the unit has a much chunkier look to it and looks technical, like the back of 1970s HiFi components, for example. The connections are easily accessible and not hidden beneath parts of the casing.

Those wishing to wall-mount the TV should be sure to leave enough distance from the wall – as with most flat-panels – in case cables need to be plugged in or removed. On the top side of the casing there are four virtually silent cooling fans.

Handling:
The Panasonic comes in a practical, reusable box, which is held together by four plastic clips. Plasma TVs are heavier than their LCD rivals, so two people are required to be able to unpack and mount this set. To tighten the screws for the pedestal, the user will need a Phillips (crosshead) screwdriver.

This Panasonic’s black remote control sports a somewhat bulky look. The manufacturing is sound and tidy, but the results are not fantastic. It is clearly too long, even for larger men’s hands, but at least all the buttons are big enough and uncramped. You can control DVD recorders or Blu-ray players that support HDMI Consumer Electronics Control (CEC) using the device buttons at the bottom of the remote.

The record button (for connected recording devices) has been placed under a small flap – a smart idea that prevents the user from unintentionally erasing a TV recording.

Separate channel-change buttons:
Like the majority of TV manufacturers, Panasonic has decided to have separate channel-change buttons in addition to the cursor cross. Manufacturers such as Toshiba or Grundig, on the other hand, have saved themselves a set of buttons – their cursor cross controls channel and volume during normal use, but works as a set of navigation keys when the menu is activated.

The Grundig/Toshiba variety is clearer and saves space on the remote, making it easier to handle. In this respect Panasonic, along with most TV manufacturers, has a lot of catching up to do.

No “Back” button included:
TV addicts will be annoyed to find that there is no “Back” button to switch between the current and last viewed channels, for example during ad breaks. Nevertheless, operation with the remote control is easy enough overall, despite its somewhat oversized proportions, which at least mean it also sits soundly on the table.