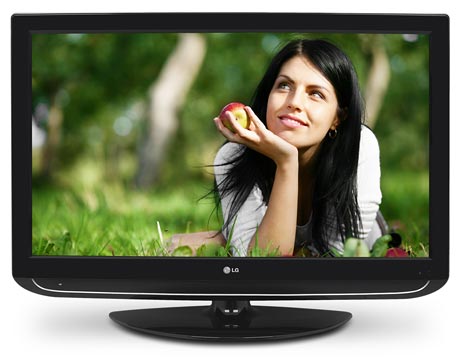 It’s a 42-incher with a built-in hard-disk recorder — sounds pretty good for 750 pounds. Well, it’s not that good. For a start, the resolution isn’t Full HD, and with a screen of this size, it probably ought to be. Secondly, the tuner only receives analogue TV and DVB-T. So unless you want to record low-quality Freeview broadcasts, the recorder isn’t really a lot of use.

Add to that the low contrast ratio, poor motion clarity, and pronounced viewing-angle dependence, and it’s clear that this isn’t one for the home cinema. If you want a TV that can receive Freeview and that has easy recording functions, however, then read on.

Clear menu design makes operating the LG easy, but a few shortcomings limit the user-friendliness. When you first install the TV, for example, it doesn’t pre-sort the detected broadcasters. And, with only sparing channel-labelling, the user needs to know the number of channel they want to record, instead of simply selecting it by name. It also takes a whole four seconds for the archive menu to display and around two seconds just to change channel.

One irritating feature is the “Auto AV” technology, which is permanently activated — with timer recordings of analogue channels, the LG will automatically record from the Scart socket if you switch on a device connected there.

With over 60 buttons, the remote control looks like a nightmare to get used to, but its clear labelling guides the user well.

The 42 LT 75 only provides tuners for analogue TV and DVB-T (Freeview) — you’ll need a set-top box for subscription cable and satellite services or freesat. With a 160-gigabyte hard disk, however, it does at least allow you to record TV programs for later viewing, as well as to use time-shift features such as pausing live TV. The internal memory accommodates 48 hours of analogue TV or 57 hours of DVB-T. But there’s no DVD burner or other way of getting the recordings off the hard disk for archiving — so once you’ve watched recordings, you’ll eventually have to delete them to make space for new ones.

Time-shift playback emerges as one of the TV’s stronger features: Recording starts automatically when the TV is switched on (“permanent time shift”), and the LG even keeps storing the viewed material when you change channel. On the down side, the buffer only holds one hour of video, and there’s no way of archiving time-shift material.

Overall, the features are inferior to those of a normal DVD recorder: Although you can program recordings via the Electronic Program Guide (EPG) for DVB-T, analogue TV offers no programming assistants, and neither method allows you to edit the recordings (for example, to cut out ad breaks).

At first switch-on, the LG finds itself in “Dynamic” mode, which produces a picture that’s too cool, too sharp, and too gaudy. In the “Mild” mode, on the other hand, analogue TV delivers an astonishingly well-balanced picture. Colours and sharpness look natural, and shadowy areas are well differentiated. The LG suffers from neither line-flicker nor stair-stepping on diagonal edges, and displays accurate pictures in both the “4:3” and “Zoom” picture-format settings. On the down side, fine-detail reproduction could be better — structures such as grass and skin sometimes look unnaturally smooth.

Motion clarity is as good as you’d expect from simple LCD TVs (not very good!), and sequences such as camera pans often suffer an even-greater loss of detail. DVB-T signals record in excellent quality, but analogue signals are just decent — compared to the original signal, vertical details look a bit too smooth, for example. 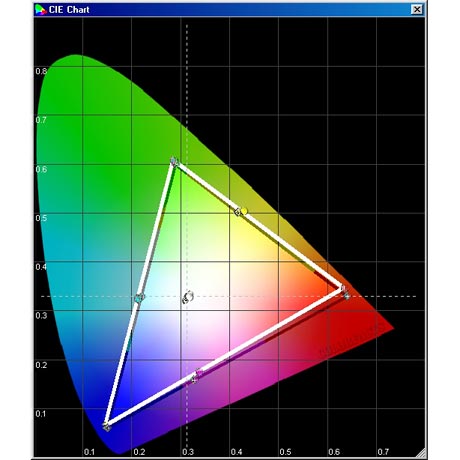 For DVD playback, the LG provides a film mode that largely eliminates the jagged edges commonly seen during interlaced camera pans. Colour reproduction is also impressively accurate: Even in the factory setup, the white point lies close to the D65 ideal value, meaning black-and-white films such as “Dr. Strangelove or: How I Learned to Stop Worrying and Love the Bomb” display with no unwelcome colouration

It’s a shame that the conventional video inputs throw away picture quality through exaggerated sharpening and simultaneous dampening of details — all of which means the picture only looks crisp at viewing distances of three meters or more; if you move closer, it lacks the necessary fine detail. In “Six Days Seven Nights”, for example, Ann Heche’s hair looks like she’s wearing too much gel.

Set-top boxes or DVD players without HDMI up-scaling aren’t totally suitable for the LG. Signals in 1080i or 1080p format via HDMI, on the other hand, produce a picture with outstanding detail. Where the DVD offers a choice of colour-encoding systems for the HDMI output, you should select YUV, since RGB makes greens look too dark. The LG’s luminance, at 260 cd/m2, is almost too strong in the evenings, and it’s not possible to dim the lamps. The “Intelligent Eye” light sensor is next to no use, since no picture controls are available when the eye is active.

Detail-rich images from a Blu-ray such as “Casino Royale” are where the LG really gets down to business — colours are accurate, and details are crisp. But still, if you look closely, you’ll see slight edge-ringing even with the sharpness control set to minimum — there’s a white band around the horse rider in “The Patriot” (playing time 88:59), for example. The combination of scaling and sharpness enhancement makes the picture noise worse: The poker table in “Casino Royale” suffers from a coarser noise than it would on good, Full HD displays.

Whether you input HDTV as 1080i or 1080p has little effect on the picture quality: The picture-cropping (overscan), sharpness, and colours remain the same, but tricky scenes show slight disturbances on fine, horizontal lines via 1080i — on the seaplane, for example, in “Casino Royale” (25:47).

We advise against inputting signals in 24p format, which tripped the LG up during testing even though the connected Samsung Blu-ray player (BD-P1400) delivered an accurate signal: As the playing card symbols flew across the screen in the opening credits of the Bond film, they seemed to sit still for an instant, over and over again — the slight pulldown judder of a 60-hertz signal actually looked better in this instance.

We’re not blown away by the LG’s speakers, but they’re at least passable. The lack of a headphone socket will irritate many users.

Picture Mode: User-defined; based on “Mild”

XD Settings: All off