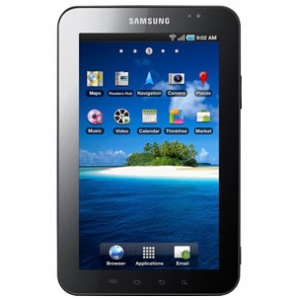 The Galaxy Tab is the first Android tablet from Samsung, and continues the Galaxy series branding from the popular smartphone.

The Galaxy Tab looks quite slick with its black glassy front, it has a 7 inch screen, which in comparison with the Apple iPad is small but this allows it to be lighter and easy to hold, even in one hand.

In terms of specifications the Galaxy Tab looks well equipped with a 1GHz processor, 512MB of RAM, 16 or 32 GB of storage, microSD card slot, front and rear facing camera, 3G, WiFi and GPS. However while the specs look good and bring a front a rear facing camera (something the iPad lacks), the tablet seems to be let down by the Android 2.2 operating system, which as Google has said is not meant for use on tablets. It at times feels sluggish and unpolished, and opening more than one app can cause the processor to be stretched in use, which is quite surprising.

Also the Galaxy Tab does seem to have an identity crisis, is it a tablet or a phone or both? You can make calls with the device, though you would look a bit silly holding it up to your ear yet the Android software calls it a phone.

Overall the Samsung Galaxy Tab may have been rushed to market to jump on the new tablet bandwagon, trying to rely on a phone platform. It has brought bigger specifications than the iPad but as said its implementation of Android lets it slide, on the plus side though, many users will be happy with the tablet, especially those who are used to using Android. We look forward to testing out a Galaxy Tab with a version of Android for tablets.